California is not only one of the world’s leading economies. It is also one of the best examples of renewable energy progress, especially for solar photovoltaic, and ambitions – crystalized by the State’s 100% clean energy goal by 2045.

Update – Around mid-August 2020, for a few days parts of California experienced temporary blackouts due to a mismatch between electricity supply and demand. To help understanding the reasons behind these events a special section “Recent Update” has been added on August 24, 2020.

In 2018, the Government of California revised the State Renewables Portfolio Standard (RPS) – a program that requires a share of the State’s electricity retail sales to be served by eligible renewable energy (RE) – upward from 50% to 60% by 2030, and introduced a new major requirements 100% clean energy by 2045a.1

Progress towards decarbonization are well on track thanks to RE. In 2018, all electricity retailers had an annual interim target to serve at least 29% of their electric load with RPS eligible resources. In general, this target was either met or exceeded.b For instance, the actual RPS procurements of the three large investor-owned utilities (IOUs): Pacific Gas and Electric (PG&E), Southern California Edison (SCE), and San Diego Gas & Electric (SDG&E), which together account for the majority of electricity retail sales in California, reached 39%, 36%, and 44%, respectively.2

Among all clean energy technologies, solar photovoltaic (PV)’s growth has certainly been the most spectacular in California in the past decade: from nearly 0% of the State’s total net electricity generation in 2010 to about 20% in 2019 (Chart). This is the result of policy support and of the technology’s cost competitiveness, typically around $35-40 per megawatt-hour (/MWh) for new projects.3 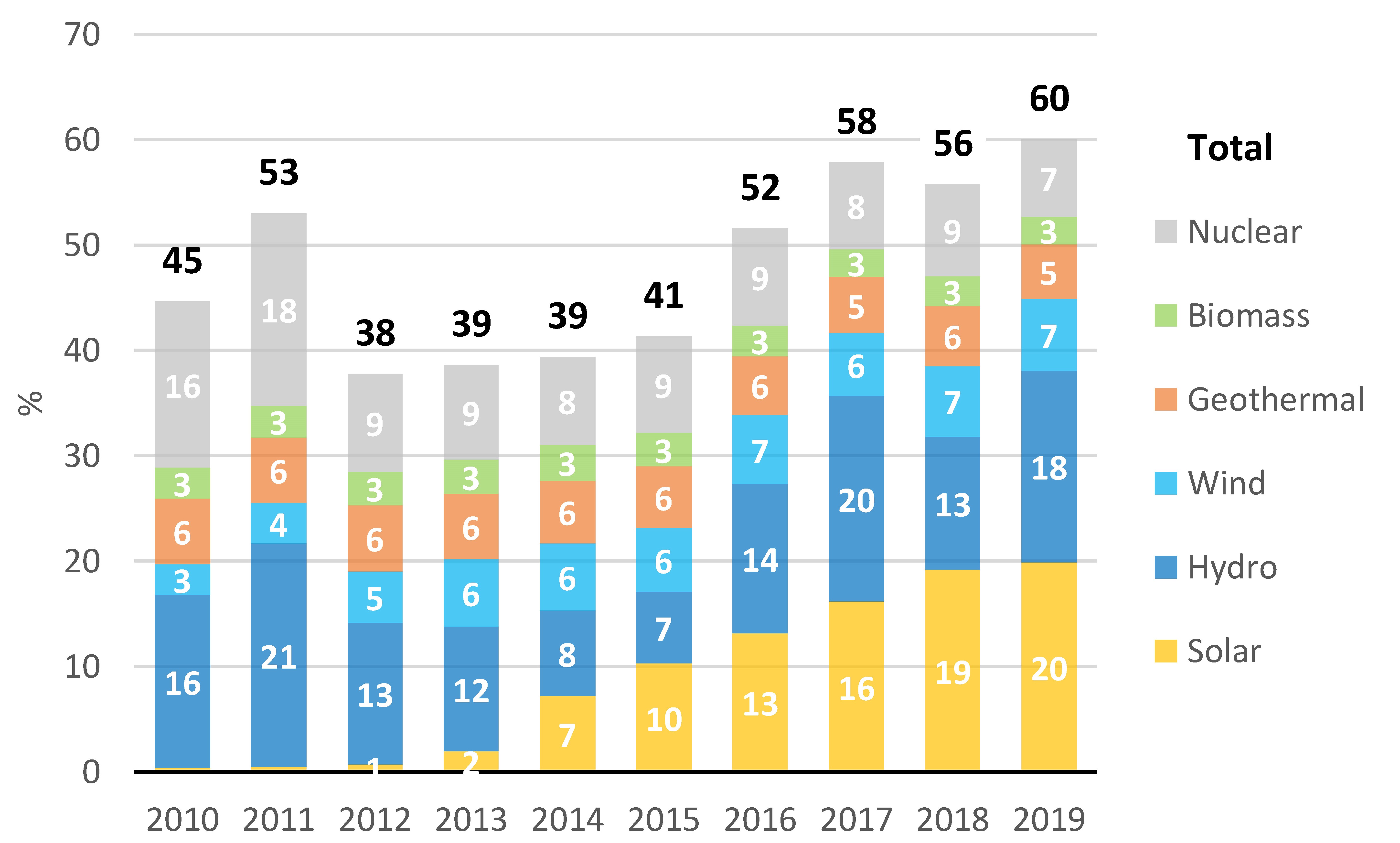 Notes: Not directly comparable with RPS or clean energy requirements because of differences in scope. “Solar” includes both solar PV and solar thermal, but it is essentially solar PV.
Source: U.S. Energy Information Administration, Electric Power Annual 2011-2018 for 2010-2017 and Electric Power Monthly with Data for December 2019 for 2018 and 2019.

Moving forward, California is planning to be even more aggressive in the promotion of solar PV. An evidence of that is the adoption in 2018 of the rooftop solar PV state-wide mandate, a trend originated in several municipal governments (Lancaster, San Francisco, Santa Monica, and Sebastopol) in 2016.4 This mandate requires that all new single-family homes integrate solar PV starting in 2020. A real step forward for the normalization of this technology.5 At the same time, efforts are pursued to ensure that disadvantaged communities also benefit from solar power expansion. Approved in 2018 as well, the Community Solar Green Tariff program creates a 20% bill reduction for people who live in areas affected by air pollution and poverty and who want to participate in community solar.6

Integrating always higher shares of variable renewable energy (VRE) like solar PV is also a challenge in California. In the first half of the 2010s already, the California Independent System Operator (CAISO), California’s main transmission system operator, anticipated this issue and coined it the “duck curve” based on a graph of power production over the course of a day showing the timing imbalance between peak demand and VRE supply.7

In response to this challenge, instructive innovative initiatives have been led in California, especially with regards to:

- Market integration: two actions may be highlighted in this field; (1) the expansion of regional cooperation, and (2) the decrease of CAISO’s day-ahead market bid floor. (1) The Western Energy Imbalance Market (EIM) is a real-time bulk power trading market – the first of its kind in the Western United States. Launched in 2014, it is still expanding and will consist of 21 balancing areas (including its operator CAISO), representing more than 80% of the Western Electricity Coordinating Councilc’s total load by 2022 (Map).8 The EIM improves the integration of VRE by making best use of available generating resources within the wide geographic area of market participants, and by signaling where potential grid investments could be profitable for the power system as grid bottlenecks arise.9 (2) In addition, in the past decade, CAISO also lowered its own day-ahead market bid floor from -$30/MWh to -$150/MWh under the notion of facilitating increased real-time economic bidding by VRE.10

- Solar PV incentives eligibility criteria: to qualify for ratepayer-funded incentives three specific conditions are required to be met (1) high-quality solar energy systems with maximum system performance, (2) optimal system performance during periods of peak demand (e.g. solar installations should be targeted to climate zones with high peak demands for air conditioning), and (3) appropriate energy efficiency improvements in new and existing homes and commercial structures where solar energy systems are installed (i.e. exceeding current standards for new buildings and requiring improvements for existing buildings). This approach is interesting because it goes beyond the pure performances of solar PV systems to also include the value of the electricity generated from these systems (where and when it is needed most), and because it establishes the role of energy efficiency as a prerequisite.11

- Energy storage: In 2013, California’s three large IOUs were mandated to procure 1,325 megawatts (MW) of energy storage by 2020 (with installations required no later than the end of 2024), with specific targets for transmission, distribution, and customer-side energy storage systems. As of August 2018, the three IOUs had procured or were seeking approval to procure almost 1,500 MW.12

- Off-peak rates for electric vehicles (EVs) charging. SDG&E currently offers different EV pricing plans favoring charging during off-peak hours, often prioritizing night time or weekends and holidays.13 More forward-thinking, however, is the company’s pilot program Power Your Drive that offers lower prices during grid-friendly times defined as “when the power grid is being energized by renewable energy and not resource-constrained,” which helps smartly taking advantage of solar PV oversupply for example.14 The full subscription of this program is a sign of its success.

Thanks to the combination of these various innovative initiatives California has demonstrated that it is possible to integrate high shares of VRE with low curtailment: only 2% for solar and wind combined in CAISO in 2019.15

The 2030 RPS target is already within reach, especially for the large three IOUs which had already in 2019 procured significant portions (roughly two-thirds) of their forecasted obligations for the next ten years.

As for the 2045 100% clean energy goal, the inclusion of large hydro will be important as it provides the very large majority of total hydropower in California, which is usually 10-20% of the State’s total annual net electricity generation. Fluctuations in electricity generation from hydropower is impactful and dry years may result in shortfalls. However, it is possible to manage these situations with a diversified, well-balanced portfolio of RE technologies, and imports. Regarding the latter, out-of-State RE are also eligible resources which can be procured to meet requirements (most of eligible resources are currently procured in-State). Neighboring States of California are either already generating substantial shares of their electricity from RE: Oregon 62% and Washington 72% in 2019, largely thanks to hydropower, or also aiming for 100% clean energy by 2045/2050: Colorado, Nevada and New Mexico (all of which do not have any nuclear reactors in operation or under construction).16

In comparison, nuclear and fossils equipped with carbon capture and storage (CCS) are not expected to play meaningful roles, if any. There are only two operational nuclear reactors in California: Diablo Canyon-1 & -2, which permanent shutdowns are scheduled for 2024-2025, and there is no new construction in sight. Moreover, CCS fitted fossils economic competitiveness remains to be proven.

Instead of these technologies, energy storage will play a bigger role. A strong argument supporting this claim is the landmark power purchase agreement signed by the publicly-owned utility (POU) Los Angeles Department of Water and Power (LADWP) in 2019 for the electricity from a 400 MW solar + 1,200 MWh storage project at just below $40/MWh.17

From Friday August 14, 2020 and for a few days, parts of California experienced temporary blackouts, usually lasting for a few hours. 18 These were not because of RE, but due to a combination of issues which are not all perfectly clear yet. 19 Though further investigations will take some time, some facts may already be highlighted.

The blackouts in question are the results of a mismatch between electricity supply and demand, the latter exceeding the former. Behind high demand was record-breaking heat (increasing air conditioning uses), and behind insufficient supply were fewer available resources.20

On the demand side, it appears that forecasted demand was underestimated and demand response (actions to reduce customers’ electricity consumption when the power system is under stress) could have been implemented more efficiently had utilities’ messages been more widely disseminated.21

On the supply side, two gas power plants failed to provide power when called upon and in-State and out-of-State alternatives were limited. 22 In-State, as California transitions towards competitive RE less conventional power plants have become available, which should trigger investment signals – especially as these types of events make market prices surge – in a more diversified RE mix including offshore wind and more storage (these are, however, not immediate solutions). Out-of-State, California imported as much as it could hydropower from the Pacific Northwest (i.e. transmission lines capacity fully utilized), and exchanges were constrained with Arizona and Nevada which power systems were also under stress.23

This experience is likely to trigger appropriate responses to avoid repetitions in the future.

The different market operators include CAISO, POUs, and a few mostly out-of-State IOUs as for examples NV Energy and PacifiCorp.