As climate change’s alarm bells are loudly ringing across the world, 2018 was another record year for electricity generation from coal power in Asia Pacific. The region is now accounting for 72% of the world’s total electricity generation from coal, against only 17% in 1985. Both developed economies; Japan, South Korea…, and emerging & developing economies; China, India, Indonesia… have contributed to this development.

Expansion of coal power in Asia Pacific has been completely at odds with global trends particularly since 2008. Indeed, while electricity generation from coal power significantly decreased in North America and Europe; -933 terawatt-hours (TWh) and -233 TWh, respectively, and remained relatively stable in other regions (Africa, Commonwealth of Independent States, Middle East, and South & Central America combined); +10 TWh, it dramatically increased by 2,979 TWh – almost +70% (!) in Asia Pacific, with the largest increases in China, India, and Southeast Asia (including Indonesia, Vietnam, and Malaysia among others).

Change in Electricity Generation from Coal Power by Region 2008-2018 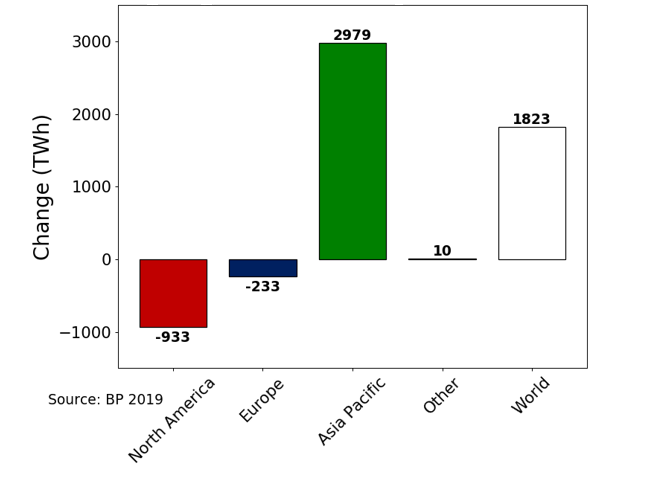 At the same time, however, Asia Pacific has made impressive progress in expanding low carbon technologies; +1,624 TWh, and especially renewable energy (hydro, wind, solar, bio & geothermal power) which accounted for more than 98% of this growth. It is thus crystal clear that for electricity generation renewable energy is the obvious sustainable development pathway in the region.
Change in Electricity Generataion by Source 2008-2018, in Asia Pacific 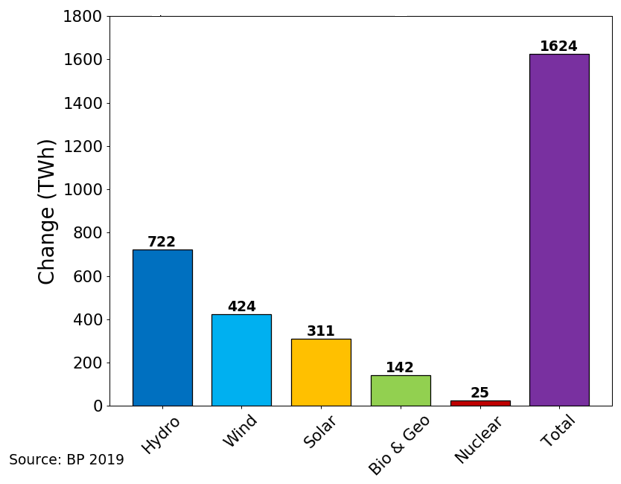 Accelerating renewable energy deployment to replace coal power in Asia Pacific will be key in the fight against climate change. And there are at least two important reasons for hope. First, renewable energy cost competitiveness improved as the result of drastic cost reduction. Second, emerging economies are now demonstrating that they could develop more environmentally efficiently than developed countries did.

Over decades, developed countries such as France, Germany, and the United States (U.S.), have managed to reduce their relatively high CO2 emissions per capita (respectively 4.7, 8.8 and 15.7 T/capita in 2018) while sustaining economic growth. After the oil shocks of the 1970s, they managed to do so thanks to improvements in energy efficiency and fuel switching: in France from oil to nuclear, in Germany from coal to non-hydro renewable energy, and in the U.S. from coal to gas.

Japan’s CO2 emissions per capita steadily increased until 2012. Since then, thanks to energy efficiency improvements and conversation efforts as well as non-hydro renewable energy expansion resulting in substantial reduction of oil consumption, the emission level decreased from an historical maximum of 10.1 to 9.1 T/capita in 2018. And that despite nuclear consumption being still way below its pre-Fukushima level.
Correlation between CO2 Emission and GDP (constant $2010), 1965-2018 with 1-years span
To meet the Paris agreement, the Asia Pacific region, and particularly its emerging economies, will have to keep demonstrating their fast-learning abilities and outperform developed economies. Today’s data on China are rather encouraging. Let’s hope it will now pursue its economic development further while decreasing its CO2 emissions per capita.