Curtailment of cheap and clean electricity generation from renewable energy (RE), essentially solar, is now a reality in Kyushu, the most southwesterly of Japan’s four main islands.

Based on data made available by Kyushu Electric Power Company (up to February 28, 2019)i, first curtailment of solar took place on October 13, 2018. Since then – in just about four and a half months, electricity generation from solar has been curtailed in 22 days, roughly 16% of days in the period considered. And a maximum of 925 megawatts (MW) of solar power – more than the installed capacity of operational nuclear reactors Sendai 1 or 2 in Kyushu – were curtailed at noon on November 4, 2018 (Chart 1). 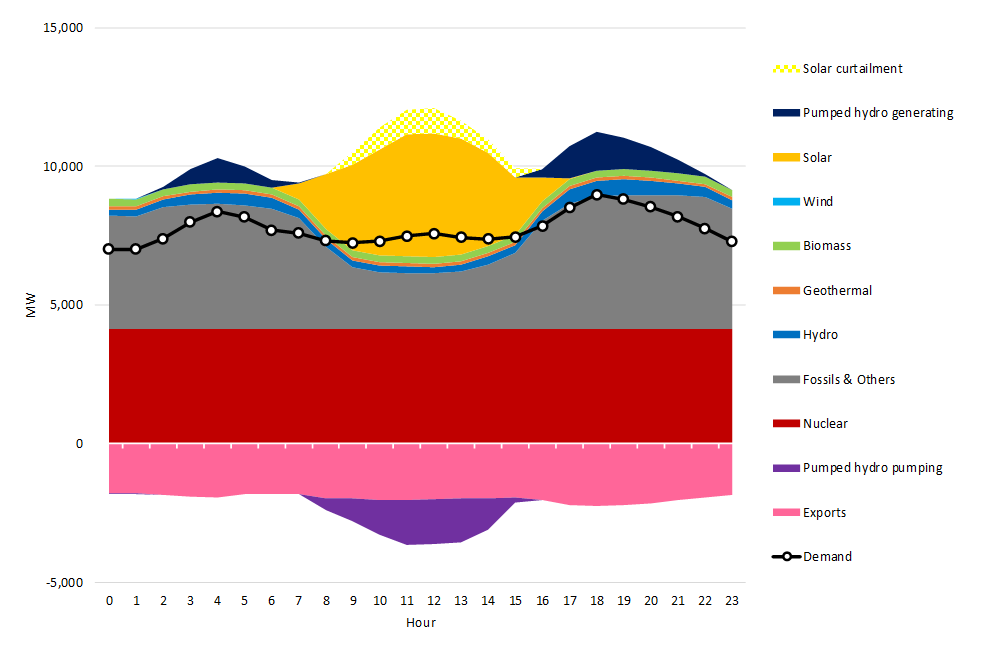 It is clearly observable that output of nuclear power plants is very stable throughout the day, and that fossil-fired power plants (coal, oil, and gas) as well as pumped hydro provide some flexibility; first by ramping down output and charging reservoirs, respectively, in the morning as electricity generation from solar increases, and then by ramping up output and discharging reservoirs, respectively, in late afternoon when electricity generation from solar decreases. These actions, still, did not prevent solar power curtailment.

From economic and environmental perspectives such system operations are inefficient; electricity generation from theoretically close to zero marginal cost, low carbon solar is voluntary reduced in favor of more expensive – on a marginal cost basis – and polluting technologies. “Theoretically” is important here since until the beginning of 2019 there was no recommendation for electricity suppliers, who still purchase the majority of the electricity generated from feed-in tariff (FIT) solar power facilities in Kyushu, to bid this electricity at its marginal cost in the spot market. It was instead associated with an “avoided cost” of about ¥6-7 per kilowatt-hour(/kWh) – making the economic case of solar power weak in terms of economic dispatch. The situation is improving though, and finally solar power is getting the economic edge that should reduce its economic curtailment.

Nevertheless, RE curtailment may then be triggered by an irrelevant curtailment rule favoring nuclear power. Indeed, in Japan, nuclear power output is to be curtailed after solar and wind power outputs are curtailed (Chart 2), i.e. despite being at a disadvantage in terms of economic competitiveness regarding marginal costs. This is because in Japan it is considered more difficult to adjust output of nuclear reactors – a technical argument that would be at least questionable, if not controversial, overseas, particularly in France where Électricité de France (EDF) has advanced flexible nuclear generation to foster the development of REii. 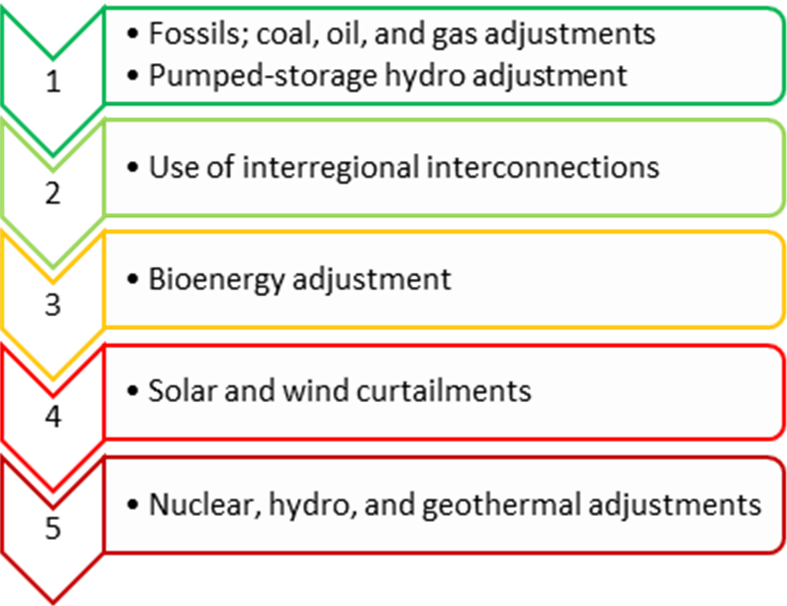 Source: Renewable Energy Institute based on Japan Agency for Natural Resources and Energy, Curtailment of renewable energy, introducing more renewable energy – September 7, 2018 (accessed April 8, 2019) (in Japanese) / original concept from Organization for Cross-regional Coordination of Transmission Operators, Guidelines for Transmission and Distribution Business (revised April 1, 2019) (in Japanese).
And this is what happened on February 24, 2019 when in Kyushu despite day-ahead spot market prices reaching a minimum of ¥0.01/kWh for 4 hours between 11AM and 3PM (based on Japan Electric Power Exchange dataiii)  – indicating an abundance of close to zero marginal cost electricity – a few hundreds of megawatts of solar and wind power were curtailed whereas nuclear power output was not adjusted.

Other issues affecting RE curtailment in Japan may be related to the lack of cooperation among local balancing areas (market-based imbalance settlement among local areas is expected to be improved from fiscal year 2021), of automation in power plant operations (this has already improved very recently in Kyushu), and of grid capacity to transport electricity (the absence of price convergence between Kyushu and Chugoku price areas when prices bottom at ¥0.01/kWh in Kyushu suggests that additional grid capacity between these two areas may allow not only more RE to be deployed, but also result in lower prices in Chugoku potentially spreading across other relatively well interconnected price areas of west Japan (e.g. Kansai)).

While automation and grid extension may require investments, amending the curtailment rule and improving regional cooperation should come at no or little cost.

For the sake of social welfare, curtailment of RE should be addressed immediately and quick solutions are available. For instance, regarding output curtailment of power plants, adopting a fair and simple market-based rule not favoring any technology, but finally putting the elementary concept of economic dispatch first would be decisive and meaningful.

As demonstrated in many European countries, such basic change of regulation would certainly drastically reduce solar curtailment, incentivize nuclear and fossil power stations to become more flexible, and encourage the development of innovative – inherently more flexible – technologies such as storage and/or demand response.

In Japan, this shift would lower electricity prices, reduce greenhouse gases, and strengthen the energy independency of the country, making its economy and society more efficient, sustainable, and resilient.