The Utilization of Geothermal Energy in Japan in Harmony with Nature

That day, at my office desk, on the ground floor of the Icelandic Embassy, I was thinking about ramen soup for dinner from the best ramen place across the street from Shinagawa. The family was vacationing in Iceland so dinner was a simple affair.

That very moment on 11 March, precisely at 14:46, a cold gust of air wafted silently through my office followed by an ever so gentle trembling. My trade attaché Ms. Akiko Hasegawa called out to me in Icelandic “jarðskjálfti” or “earthquake”!

O, yeah, one more time, I thought. The preceding Wednesday we had a 7.0 on the scale and I thought that it had been the big one, occurring during massive earthquake activity off the east coast of Japan.

How wrong you were you puny, little man.

That was the first time it occurred to me that here I would die.

I sat at my desk while the people in the Embassy building were doing what they were trained to do under these circumstances. Make oneself small under desks or huddle in doorways.

If three floors of the Embassy were going to come crashing down on my head I did not want future rescuers to find me squashed like an insect under my desk. No, they would find me sitting at my desk, squashed like a man.

Then silence, time seemed to stand still but with an accompanying persistent ringing in my ears. Again, Akiko called out, now a tsunami was ravaging Sendai and East-Japan and in its path was Fukushima Daiichi, a nuclear facility about 238 km North-East of Tokyo. Just 238 km! A two hours drive in a good Mitsubishi.

On live television the horror was playing out in real time and people were dying on the eastcoast. At Fukushima Daiichi, the generators keeping the cooling system going for the reactors, were knocked out by the tsunami.

To a layman, the live pictures from Fukushima looked either like Armageddon or the birth of a Chernobyl sibling.

My good friends at Mitsubishi Heavy Industry kept me abreast of the latest news of spreading radiation from the now destroyed heap of rubble and twisted metal.

Hundred of thousands fled Tokyo, which could be covered by a radioactive cloud reported to be on its way. About 23 Embassies closed their doors and diplomats fled to the farthest corners of Japan or abroad. Even the Nordic togetherness vanished with the closing of the Finnish and Norwegian Embassies.

I did not close the Embassy of Iceland and decided to stay on my post.

That was the second time it occurred to me that here I would die.

The crazy webs that Fortune can spin!! Having spent a greater part of my working life encouraging other countries, Japan among them, to use clean, cheap and non-polluting geothermal energy, I was going to die of radiation poisoning in Japan!

That was then, this is now.

Radiation in my opinion is similar to Covid-19. It is invisible and can be fatal if one comes into contact with large doses of the virus or radiation.

As Ambassador in Japan I marveled at how fortunate the Japanese people are, while Indonesia has about 40% of earths available geothermal resources and the United States is in first place when it comes to the total geothermal megawatts utilised, Japan is among the top countries blessed with geothermal resources. For example, in Japan's snowy regions from Hokkaido and down the west coast of Honshu Japan, you could install geothermal district heating systems like here in Iceland where more than 90% of all houses are heated with geothermal hot water and we also produce electricity with Japanese geothermal technology.

In Iceland about 95% of all geothermal turbines are from Japan, Mitsubishi Heavy Industry and Fuji Electric just to name two.

Reading an article in the Japan Times 9 March 2019 titled “Unlocking Japan´s geothermal energy potential” it seems like I am reading a JT article from 2008. Japan utilizes, about 500 megawatts, much less than Iceland which utilizes about 750 MW and while Japan is no. 3, Iceland is no. 8.

Have you in Japan ever heard of the Blue Lagoon in Iceland? 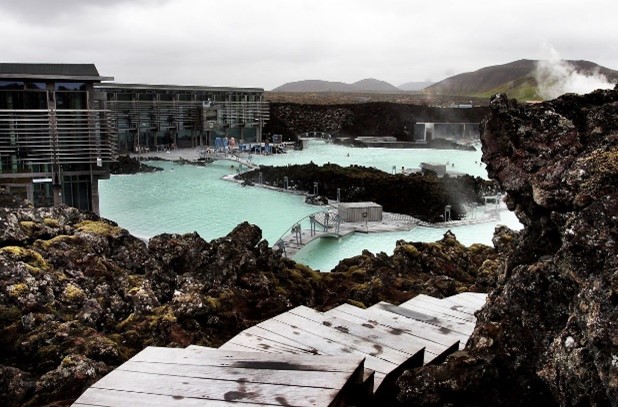 The Blue Lagoon (Icelandic: Bláa lónið) is a geothermal spa in southwestern Iceland. The spa is located in a lava field on the Reykjanes Peninsula, in a location favourable for geothermal power, and is supplied by water used in the nearby Svartsengi geothermal power station. The Blue Lagoon is approximately 20 km from Keflavík International Airport, and is one of the most visited tourist attractions in Iceland. Now Blue Lagoon has become a "must-do" on tourist agendas far and wide, and the number of visitors has increased from about 50,000 in 1994 to 1.3 million this year.

After the Fukushima disaster  in 2011, it was calculated that with the same geothermal utilization as Iceland, Japan could replace up to 25 nuclear reactors.

Never has the utilization of a geothermal reservoir in Iceland been abandoned because of a depletion of the reservoir.

The basis of this is the careful monitoring of the reservoirs and predicting their future response.

On 17 February 2012, a memorandum was signed in Iceland titled:
Memorandum of Cooperation between the Ministry for Foreign Affairs of Iceland and the Japanese Bipartisan Coalition of Legislators for Promoting Geothermal Power Generation in the area of geothermal energy.

That memorandum stemming from the Diet is still in effect.

From ThinkGeoEnergy by Alexander Richter:
“The Resource Park has been developed in the vicinity of HS Orka geothermal facilities on the Reykjanes Peninsula in the Southwest of Iceland not far from Reykjavik, the Capital of Iceland. With its unique model, the Resource Park is a showcase for a new thinking surrounding the utilisation of geothermal energy that encourages development and utilisation of the resources to its fullest potential. The Resource Park of HS Orka wants to raise awareness about the valuable resources that the company is entrusted with and its task to ensure that it will last for generations. “The multiple use of resources supports the responsible use of resources and contributes to the sustainable development of the society.”, says Kristín Vala Matthíasdóttir, the Director of the Resource Park at HS Orka.

From Wikipedia:
The Imagine Peace Tower (Icelandic: Friðarsúlan, meaning "the peace column") is a memorial to John Lennon from his widow, Yoko Ono, located on Viðey Island near Reykjavík, Iceland. It consists of a tall tower of light, projected from a white stone monument that has the words "Imagine Peace" carved into it in 24 languages. These words, and the name of the tower, are a reference to Lennon's campaign for peace, and his song "Imagine".

The Tower consists of 15 searchlights with prisms that act as mirrors, reflecting the column of light vertically into the sky from a 10-metre wide wishing well. It often reaches cloud base and indeed can be seen penetrating the cloud cover. On a clear night it appears to reach an altitude of at least 4000 m. The power for the lights is provided by Iceland's unique geo-thermal energy grid. It uses approximately 75 kW of power.  ……Iceland was selected for the project because of its beauty and its eco-friendly use of geothermal energy.

Back to Special Contents Page